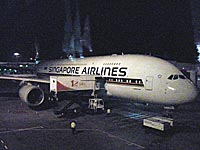 A trip of a lifetime. By Steve

I've been waiting for Singapore Airlines to launch there new double-decker A-380 since I first learned about the massive jet back in 2005. I had already done an inaugural flight on Singapore Airlines new Airbus 345 from Newark to Singapore in June of 2004 & I most definitely wanted to be on this inaugural.
The night before the departure to Sydney of the inaugural another aviation enthusiast, sponsored a party at the Swissotel, where some 80 people showed up to meet each other. People came from all points of the globe to Singapore to be on this flight & most of us never knew each other before this night. A great site about the event, by the way, is to be found here: SQ380.net. 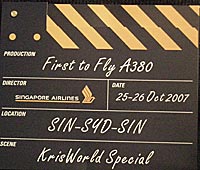 Thursday morning, 5:00am.
The day we all have been waiting year's for has finally arrived.
We boarded a Singapore Airlines media bus at the Swissotel where the media had been staying the night and they will be flying with us to Sydney. We are now on our way to Singapore's Changi Airport. A party awaits us inside. The line moves fast thru check-in, & once our bags are checked to Sydney we are asked if we would like to have are pictures taken for Singapore's postage stamps. Something unexpected & something eagerly accepted. Onto gate F-31 where a Singapore Airlines sponsored breakfast awaits us: Coffee, tea's, juices, roll's & meats & cheese. All done up very nicely with waiter's & staff to take care of all the passengers waiting to board SQ380.
As breakfast is being served Singapore Airlines dignitaries are introduced & the money collected from the first flights of SQ-380 charity auction are talked about.

On our way Mr. Chew Choon Seng, Singapore Airlines CEO is there to greet us & the Singapore Airlines girls are at the door to have pictures taken with us & show us to our seats.
Unfortunately, my $2000 still only bought me a seat at the back of the 380, but I have a seat on the inaugural!
Front, middle or back it's on the "once in a life time" flight. Seat 40C is mine, just atop of the wing on the main deck & an aisle seat, I'm happy with it.

The main deck is 3-4-3 in economy class, the upper deck is mostly 2-4-2 seating.
In each seat was a gift from Singapore Airlines, a Goodie bag. A booklet showing all the features of the 380, a metal model of the 380 with the date of the inaugural flight, a 2008 calendar and a First to Fly Krisworld special edition.
Also a Luggage lock. First to Fly Luggage tag. A handy bag to store your carry-on liquids with. A Montblank catalogue. And last, but not least, two Cerruti Pen's, a ball point & a fountain pen, both engraved with the Rolls Royce logo.

Now about the seats 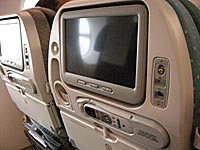 A 10.2" LCD tv is in the seat back with Krisworld with 100 movies & over 180 tv shows, plus 700 CD's & 20 radio channels plus the krisworld game channels will make any flight seem short.
Seat width on both decks is 19" and the pitch is 32". A bit more leg room then in the Singapore Airlines 747's, but not nearly not as much as in there Executive Economy class 345.
But still more then you'll used to.
The 380 took most of the runway at Changi & lifted slowly & gracefully & VERY quietly.
Captain Ting later told us he only used 74% of the power from his four Rolls Royce Trent 900 engines.
I do not fly a whole lot, but did fly the 747 back from Sydney to Singapore & this 380 is definitely noticeably quieter. While cruising at 39,000 feet we could carry on a normal conversation sitting above the wing & engines.
These Rolls Royce engines are a new breed. After the safety video Charles Heidsieck Champagne was served through out the flight along with any drink one wished to have.

Singapore Slings where a big favourite with the three in row 40 A B & C, along with the champagne.
Now, one of the Singapore Girls came and handed out the certificate of "First to Fly" on the SQ380, signed by the pilot, captain Robert Ting & the CEO of Singapore Airlines Chew Choon Seng.
The whole flight was a party atmosphere, everybody meeting new friends & exploring the double decker. We all went upstairs without any trouble. The upper deck is a bit narrower then the main deck but still very roomy & comfortable.
I didn't try or go to Business class or the new Suites, but from what I've seen in pictures they are above what you're used to flying, especially the "Suites". 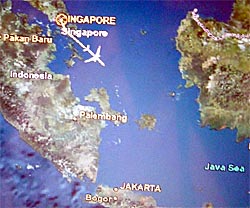 Time for lunch, & this was the only time all the passengers were seated at one time.
Sam Leong from Singapore & Matthew Moran from Sydney are both onboard to oversee the preparations of the meals. Both chefs were available to sign the menu & chat with passengers.

This meal was created by Sam Leong.

Now a few hours later we ate again, this meal being created this time by the chef from Australia Matthew Moran.

And just before landing in Sydney another snack.
Baked fried rice with yellow pumpkin, chicken & mushrooms wrapped in lotus leaf, prepared by Sam Leong.
or

Now after 8 hours of a history making flight it was now time to come back to earth & reality. Three gourmet meals, many bottles of champagne, plenty of glasses of Singapore sling's it's now time to see what the new "King of the Skies" feels like landing.
Captain Ting circled Sydney Harbour but the cloud cover was very low so we didn't get a good view. As we touched down on the runway crowds of onlookers lined the airport's runway to cheer on the arrival to Sydney of SQ380. We touched the runway with hardly a bump & just as quiet as takeoff.
We now had to exit this remarkable aircraft & in doing so we all were greeted once again by a very friendly Singapore Airlines staff from Sydney & once again Singapore Airlines CEO Chew Choon Seng.
Mr. Seng reminded me of a proud father, always with a broad smile, eager to shake ones hand & hear about the flight.
I flew back to Singapore two days later on SQ220, a B747, a nice aircraft, but not a A380.
I stayed another day in Singapore before going back to New Jersey on SQ22 there A345 which I did the Newark-Singapore inaugural in June of 2004.
I don't do nearly as much flying as some of the few people who may read this report but think any large USA airline who regularly fill's an aircraft on coast-to-coast trips should look into this amazing new breed of jet.